“Teaching my peers is only half of the battle” 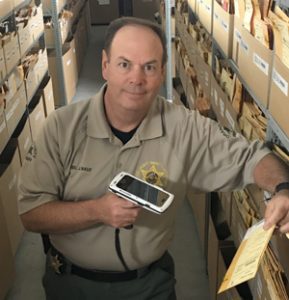 James Nally began his career in law enforcement as a Law Enforcement Security Policeman for the United States Air Force.

After the military, James began his career with the Orange County Sheriff’s Department and worked several assignments including Correctional Facilities, contracted field operations providing Law enforcement services to a variety of County Facilities and over the last 20 years James has been assigned to the Sheriff’s Property & Evidence Unit.

“Having an understanding of both sides of the lockers has given me an objective perspective,” James says. I realize cops duties in today’s world are complex and demanding, yet as a support function of our agency, the evidence unit is here to ensure that none of their hard work is lost on a procedural error. We also understand our neutral role as evidence officers can be even more daunting when it comes to the disposition and or the release of evidence items to the people we deem “lawful owners”.

James has excelled in creating new standards or “Most Effective Methods” for Evidence Management. His passion or obsession for P&E has earned him the nickname of “Property Sick”, as his peers kiddingly call him. This passion led him to training.

“For the longest time in my law enforcement career, I never saw a need for training because my team at the Sheriff’s Dept. was large and knowledgeable. However it wasn’t until I attended my first CAPE meeting, (California Association for Property & Evidence) and realized most LE agencies were not providing training, under-staffed and supervisors were unable to resolve the unique P&E issues. I truly believe training became my passion as a result of Evidence Units being completely under served and my desire to elevate this industry.”

James has been instrumental in a multitude of projects that have helped elevate the California Property & Evidence Industry. “Teaching my peers is only half of the battle”, James said in a recent interview. “The other half is providing awareness for our Law Enforcement Leaders to understand, appreciate and reward the work that we do.”

James now enjoys training his peers with his company Chain of Custody. James said “When the attendees come to class it is not the traditional lecture yet a workshop where everyone participates.” He works hard to find unique, relaxed training venues. He is passionate about answering questions and providing easier solutions to his peers’ processes during his workshops.

Outside of his work with the OC Sheriff’s Department and Chain of Custody, James and his wife keep extremely busy with their 14 year old son’s sports and hobbies. To relax, you might catch him paddle boarding at the Newport Back Bay, riding his beach cruiser at Bolsa Chica State Beach, helping his son mix down his music recordings or chilling in the pool with a cocktail.

Visit chainofcustodypro.com to view all upcoming classes and to schedule a class.

31
Tracker’s a veritable canine icon who stands for a whole lot more than your typical bloodhound. As such, he has been our corporate mascot for well over 30 years. Why? Because he stands for what we all strive to be as a company. He’s loyal and trustworthy. Pretty easy to please and intensely focused on the mission that he was bred to accomplish…sniffing out the bad guy. He’s always gregarious, cheerful and willing to perform. Toss him an occasional bone and he’ll be most appreciative…even more so with a more substantial meal. Tracker has been gone for many years now, but his enduring spirit still lives on. His picture is emblazoned on every one of the products we sell…just to remind us. Guess we’re just crazy dog people here. We figure a little bit of dog drool now and then never hurt anybody. (We’ll keep a towel ready just in case.)